A Sonop resident is a normal person who works harder than other normal people and this is the core of Sonop’s success.

Hard work, perseverance and difficult times. Sonop teaches you how to function under difficult conditions – diamonds are only formed under high pressure. Christian values, character and perseverance – that’s our culture.

Sonop takes young boys and teaches them what it is to be men. Men who establish the Kingdom of God in our midst with truth and power. Men who will take on the roles of head and priest of their families with a God-fearing love. Men who walk in God’s light and keep on seeking a deeper relationship with God.

Sunrise is your unfair advantage in life. This is something an ex-Sonopper told me has stuck with me to this day. Every day that passes one sees that Sonop is an investment in one’s life.

Sometimes I wish the walls at Sonop could talk and tell the stories of the past. Fortunately, the walls carry the tradition, culture and brotherhood of all the previous years and so it becomes part of every new Sonopper’s Sonop experience. What a great privilege it is to be able to live in a place like no other.

It’s about pride. It’s about history and tradition. It’s the Hope for the future. In all areas, from culture, academia and on the sports field. The ordinary guy suddenly turn into a hero. Sunday night echos the sound of a group of men through the streets of Pretoria. 105 years of tradition are always together in spirit. Because “Very few can be a Sonopper”.

What’s worse than a home without a mother …? Definitely “Sonop without a Nonnie”. As Sonop’s Nonnie it is not only my duty to keep every young man’s stomach full, but out of love I carry every Sonopper’s interests at heart. Nonnie is your mother away from home … 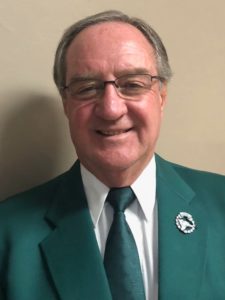 After Willem Boshoff’s resignation as Chairman of the Union of Old Sonoppers or BOS for short as we are better known, I suddenly find myself in the chair of Chairman. Quite not something I expected. Willem has held this responsibility for some time and has certainly done well. This is evidenced by the success of the 100th anniversary festival in 2016. It will certainly not be easy to fill Willem’s shoes. Luckily his shoe will not fit me anyway, for that my feet are way too big and myself and the new Management of BOS will have to look for our own shoes and grow in them.

Willem, thank you very much to you and your team for the work of the past few years. We are sorry that your heart has attacked you and we are grateful for your recovery. We would like to wish you good health.

Let me explain how it came about that I suddenly addressed this letter to you. Here at the beginning of the year, the Chairman of the Sonop Board asked me to help a little with the discussions with UP about the relationship between Sonop and UP. The fact that I was totally independent of Sonop (simply because I was not officially involved with Sonop at that time) and also did a lot of work for the UP Management before, may have made it a little easier because I have been for some time know quite a few of the members of UP management and have already developed a certain relationship of trust over time.

The end of the talks with the UP management was that UP unilaterally suspended the Memorandum of Understanding with Sonop. Although it was totally unexpected, the student politics of the day and also the national politics played a definite role in this process. The Sun Council has certainly kept you informed in more detail about this process and I will not elaborate on it other than to make the following statements.

The suspension of the Memorandum of Understanding between UP and Sonop has been made clear:

I personally have always believed that the Sonoppers are certainly extremely creative, stand together and support each other, and this the current generation has clearly proven. When they were not allowed to participate in the Inksync (which our older guard knew as the Ienkk concert), they hosted their own concert. Similarly, they presented their own serenade and went to sing for the beautiful girls of the Puk (or North-West University as it is called these days).

Similarly, they will make their own plans to participate in sports and do quite a few other things. Sonop’s own Spring Day has already become very famous and I am convinced that the young men will do their own thing with various initiatives.

What does all this mean for our older generation and now it’s not only the grays among us but also the men who lived in Sonop for as short as last year? We have the obligation and responsibility to support the many young people who now live in Sonop and enable them to do the good things and keep the Home’s name high with both what they do and the way they do it. do.

Remember Sonop belongs to the League of Old Sonoppers in common. This is our property, this is our place and we provide it as a residence for the current and future Sonoppers. We have the privilege but also the obligation to create for the current and future Sonoppers the opportunities as each of us has experienced and experienced and to get the value out of their stay in Sonop as we once got.

However, this fact also presents a challenge for each of us as Former Sonoppers. We will have to pull a little finger and get involved to make sure that the spirit of Sonop and his unique character and example is not lost. From the good that has shaped and bound us, we must take and give back to make sure that it continues to exist for future Sonoppers, our children and grandchildren, and for some perhaps even great-grandchildren. However, we are going to have to do it in such a way that those who now leave Sonop on the day when they have finished their studies, are properly equipped for the life of work where they have to participate competitively. It is a life that has changed a lot over time and will surely change even further. We can therefore not only want to continue what we have done and experienced but will have to make room for the changes of the time in which these young men live and will continue to live in the future.

Enough preaching about this for the moment.

From my limited involvement in the 100th anniversary of Sonop in 2016, I was surprised at the extent to which the various year groups kept in touch with each other or at least different groups of people in the year groups. We were initially about 10 men who were first-years together (of which 8 are still active) who talk to each other regularly and still see each other fairly often, sometimes once a year, sometimes more often. This contact was maintained despite the fact that we each led our own lives and worked and lived widely across the country. It was quite surprising to see to what extent the same thing happened to groups of men from other year groups.

I think the big challenge for Old Sonoppers is to now expand this bond that we have with each other in smaller groups to the larger Sonop as a whole. When we do this, we will succeed in keeping the Sonop of today still relevant and utilizing and supporting our common asset in such a way that it will continue to remain for the present and future Sonoppers the place to which they want to remain connected and with which they want to associate, even long after they are gone.

How are we going to get it right? I would like to hear each and every one of you’s opinion on this. I and the management of BOS have a certain view on this. We believe we should continue to make Sonop the place where we prefer to come together and share common interests. The Management of BOS therefore wants to change the thinking framework so slightly and make Sonop the place where we will meet each other through initially some social events such as a BOS day and later perhaps more often.

We know for sure that quite a few of the men meet from time to time and maybe have a braai and visit somewhere or just drink a beer and go home. We want to see Sonop become the place where we meet. Where Sonop had previously only had contact with us to ask for money, we would like to give more and create a place where we can meet each other more often and hang out a bit.

Another responsibility that the BOS management also thinks we should accept is to look at the finances of Sonop. If Sonop is our common asset and place then we should maintain, restore and improve it so that we do not have to be ashamed of the place where the current and future Sonopers live. We will first let the thoughts go about this and then let them know how we think about it.

The operation of Sonop is the responsibility of the Council and we can certainly not expect them to create greater maintenance, restoration, renewal and new facilities from the operating budget that only comes from the fees paid by the current Sonoppers. We will have to accept responsibility and responsibility for this.

Similarly, we will also have to think about the fact that we have to help finance the cost of accommodation to be able to study at UP for some of the current and especially future Sonoppers. We all know that it gets incredibly expensive to study. With smart plans, we can help make it easier if we can award some scholarships to students who might not otherwise be able to afford to stay and study in Sonop. We would also like to hear some thoughts on this and get suggestions. If we can make this contribution, we will make it much easier for the Sonop Board to deal with day – to – day management and to make sure that Sonop remains the institution where each of us has lived and enjoyed particular benefits.

Feel free to let us know how you feel about this.